Glo, grandmaster of data  just added to their data plan . Called WTF  (WhatsApp+Twitter+Facebook Plan)  Social Bundle Plan which can get you Glo 500MB for N100 on this plan. 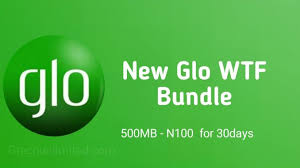 We call it a data plan that makes one browse on social media in pack Glo WhatsApp+Twitter+Facebook.

Let’s get to know some social data plan list of these plans.

There are more related plans on the bundle pack plan which you can choose from when you hit on a button.

Now you know the price and vaavidity date

Then you will see list of the social bundle data plan, you can now go suitable ones for you.

GLO is privately owned by the Mike Adenuga
Cobblestone Properties and Estates, a real community that also consists of
Land and property production agency, Conoil PLC, a petroleum corporation
Conoil Manufacturing, a crude discovery and marketing firm, and
Company for production.

Glo’s Smartphone
Glo Mobile, a division of Globacom, is the second largest mobile provider in Nigeria.
User of Networks. It had one million in the first year of service
Subscribers in over 87 Nigerian cities with sales of over 120 billion Naira. Today, Glo Mobile has expanded to other countries in Africa, including Benin and Ghana. The user base of Glo Mobile in Nigeria stood at over 45 million by December 2018.